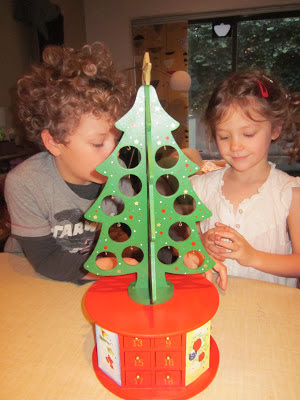 Every day of December we have a little Advent adventure. My children take it in turns to find out what it's to be by opening one of the little drawers in our Advent tree (above). Last year I captured each activity with a photograph, and posted them all here. This was incredibly difficult, what with there being so little light in December; I haven't been nearly so ambitious this year. But yesterday's adventure is worth posting about because it was rather special. Born out of necessity, I simply tweaked it to become more of a treat, and we had a wonderful evening as a result.

I'd had a text the day before saying that my son's glasses were ready for collection. It's only been in the past month that we've come to realise that he needs them; when he excitedly told me that he'd spotted a horse across the Green and it was clear to me that it was actually two people carrying their Christmas tree home, I made him an optician's appointment. They confirmed that he is indeed short-sighted.

So I wrote in their Advent tree drawer:

Collect Buddy's glasses and test them out in the pub opposite the optician's.

On paper, I know this doesn't sound too festive - but the optician's was decked with decorations of the season, and they gave Bud a little Christmas present along with fitting him with his new specs. Bud had fun trying on some alternative eye-wear too: 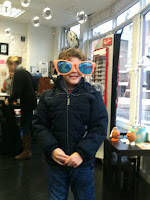 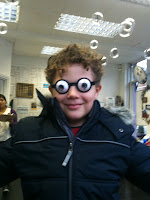 And here he is in his actual prescription glasses. 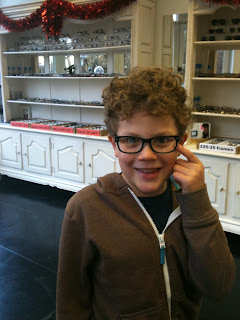 Then we hopped over to the wonderfully old-fashioned, open-fired, wood-panelled Rose and Crown for drinks, nuts and a hand of cards. We sat right next to their enormous Christmas tree and Bud, proudly wearing his new glasses, couldn't help but tell us about the things he could see, and to read out the text he could spot around the pub. And to top it all, he beat us at a highly competitive game of Knock-out Whist. Here he is shaking hands with me after the match; a most gracious winner. Now, not only does he behave like a gentlemen, he looks like one too. Advent adventures don't get much better than that. 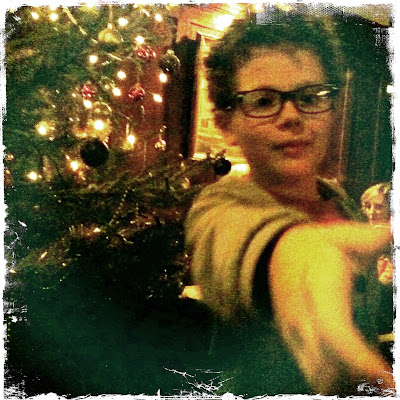