It's not pretty, but it's play 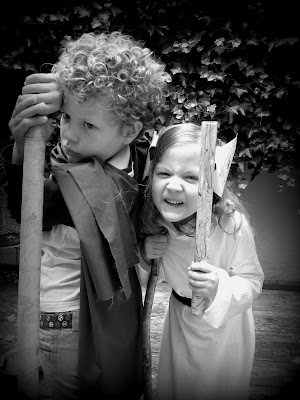 Recently, my children's play hasn't been nearly as pretty or as obviously photogenic as usual. However, I've still snapped away, trying to capture all their brilliant adventures, and fortunately, I've discovered a great image processor on Picasa 3. I think this 'plastic' camera effect works really well for this particular collection of Buddy and Daisy at Play pictures. 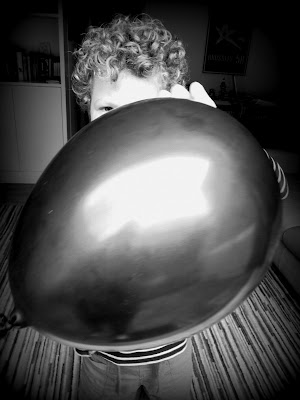 On Saturday, Darth Vader gave us a super quality black balloon at a Star Wars party (which explains the Jedi and Yoda costumes in the top photo). There have been a great many giggly games of keepy-uppy since then. 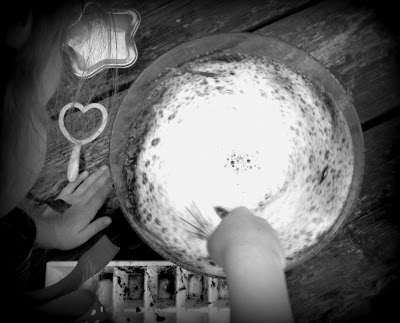 There's been some top-notch potion-making; but no perfumed petals or glitter were involved this time. Instead, leaves, carrot-tops, mud, water, washing-up liquid, vinegar and small stones were collected, whisked into the 'cauldron' and then the nasty-looking mixture was poured into jars. 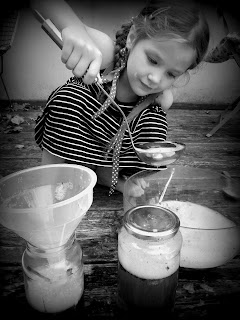 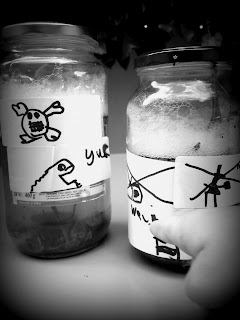 They are deadly potions, apparently. They have the labels to prove it. 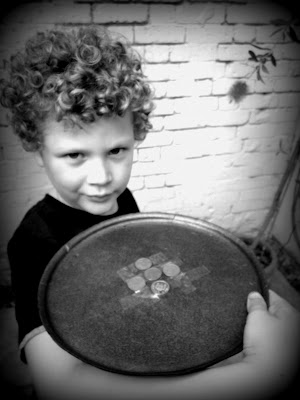 This black, shop-bought, pizza packaging has been transformed - with the weight of a few pennies - into a surprisingly robust flying saucer. They've been having some fantastic post-dinner frisbee games in our little garden. 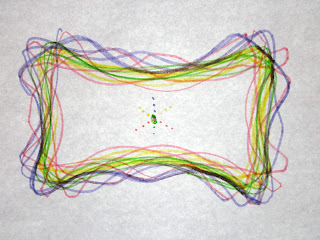 Thursday's leaden skies and intermittent drizzle forced us to abandon our planned expedition to a new art installation on the South Bank - Rainbow Park. Instead, while the children were tucking into their after-school snacks, I raided my stash of emergency play-prompts. One of the first things I spotted was a brand new spirograph set from Nan. So, out it came. 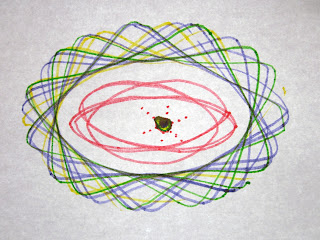 Playing it cool, I said, 'Look what I've found. I don't suppose you'd like to try it out, would you?' They responded with oohs and ahhs, and can we really do this now? I love it when this trick works - they're putty in my hands. 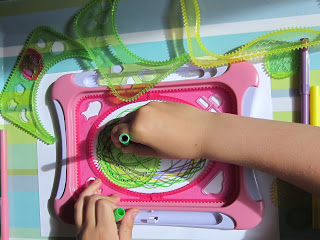 I helped remove the packaging, my seven-year-old read out the instructions with an important air - he loves doing that, and we had a bit of a discussion about gears and cogs. And then, I'll admit a little reluctantly, I stood back and left them to it; my presence was definitely surplus to requirements. Although spirographs have been on the market since the 1960s, I can tell you that they still have plenty of appeal to at least two 21st century children - they simply loved this activity. And as they played and created, I noticed the rain stopping and the sun coming out. 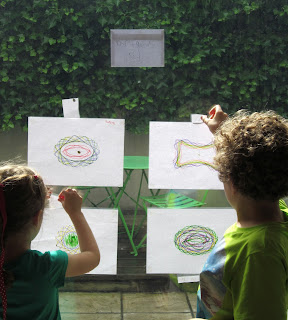 They were so pleased with their pictures that they decided to display them. I suggested, off-handedly, that they might make their own art gallery - and they were off on a new exciting adventure. Signing and displaying their finished pieces, writing labels, and pricing up their artwork - they busily got ready for the opening. The pictures looked quite beautiful against the now sunny window; their translucency giving them a luminous, rather ethereal quality. 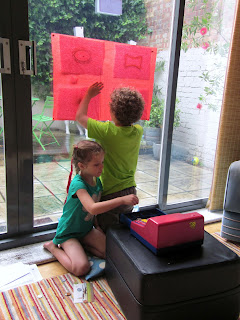 Daisy ran upstairs to get their cash till, and then they displayed paintbrushes, paper and rulers to sell on the counter. At last the pop-up gallery was ready for the grand opening. Thank goodness Daddy was now back for the first viewing.

It's amazing how all this play and creativity flowed from just one initial prompt. It's just having that special something up your sleeve - that's the real trick. That, and an unexpected rainy afternoon.
Posted by Julia Deering at 15:46 No comments:

Say it with yoga 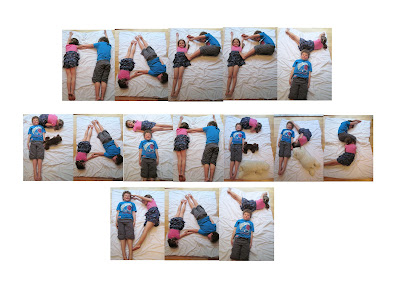 It's Father's Day here in the UK this Sunday. My children were so disappointed when I told them their daddy would still be away then, working in Cyprus. However, they jumped at my idea of sending him a special Father's Day message via the internet, and when I suggested using themselves as the letters, they actually squealed with anticipatory delight.

With giggles and squirms, they planned each letter together and then, standing on a chair, I snapped their final positions. It turned into a kind of fun photo shoot and, unintentionally, the children got to practise a few yoga positions too. I think it's made a rather lovely home-made gift - albeit a virtual one.

You might spot Snuffy and Snowy, their beloved bears, starring in a few of the photos. Daddy will definitely note and appreciate their important contribution - he's good like that.

Happy Father's Day, Daddy Deering.
We love you, and miss you very much xxxx
Posted by Julia Deering at 11:43 1 comment: 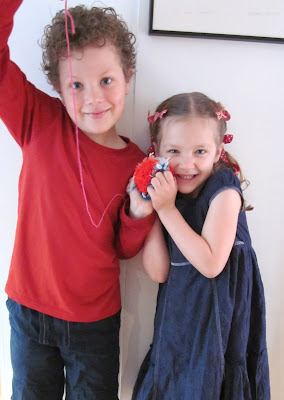 We are just about to escape to the country, and from our computer, for a week. The first half of the school's summer term is about to finish - and it does so in a flurry of red, white and blue - with the Diamond Jubilee celebrations resulting in the children bringing home patriotically decorated paper crowns, fans and, somewhat randomly, pompoms. 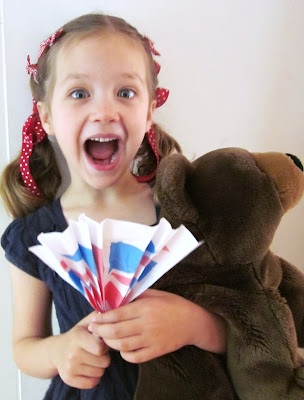 We end the half term of school as we began - with Daddy away. He was working in India at Easter, and tonight he flies back from Bahrain; we will collect him from the airport tomorrow. The children get so excited about meeting him - the picture below shows them minutes before his arrival last time - see what I mean? 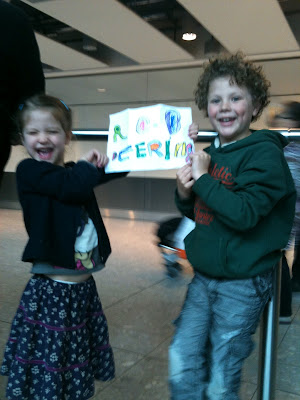 The airport-collections-of-daddy neatly punctuate a six-week period of busy playing, learning and achieving for all of us. I've been working on some very exciting projects; writing and performing a brand new story about a teapot, a coffee pot and a chocolate pot for the Geffrye Museum, and designing all manner of horse puppets for a new session at The British Museum. And Daddy has been writing a new show to take up to the Edinburgh Fringe in August, so there's been much drumming and guitar-wielding round our house too. 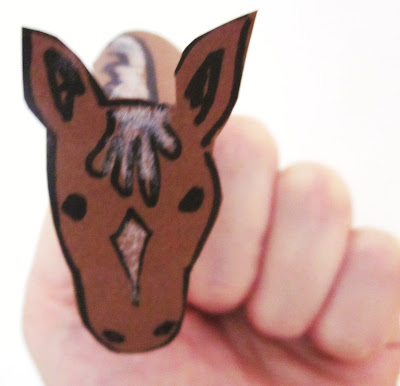 Bud and Daisy have also achieved a lot this half term. They were both Stars of the Week at school - Bud for his brilliant numeracy work, and Daisy for being a great friend and role model. Daddy made them a CD to say well done. It's full of fantastic rock, pop, jazz, house and rap songs, with a Numbers and Friendship theme - how cool is that? We've also been experimenting with a new way to measure the children's individual personal achievements. Bud puts a car in a jar every time he's successful at his particular goal, and Daisy puts a marble in hers. When their jars are full (which is about every week) they get a treat - a new book, or maybe time on the computer. As soon as the jars are full, they are emptied - a very noisy and satisfying activity - ready to be filled again. As a motivational 'carrot' - it's working a treat, and I think they look great too. Now, how to get these jars to Wales... 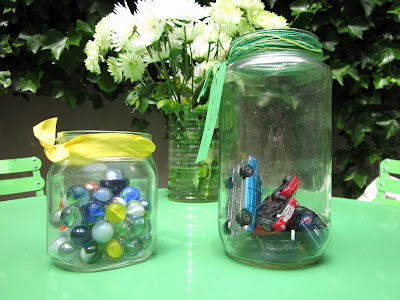 Posted by Julia Deering at 04:22 No comments: