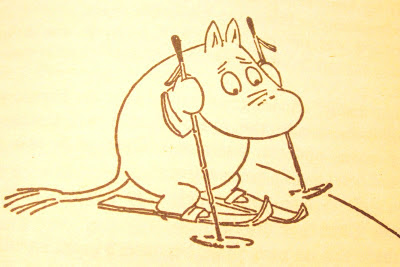 Our bedtime story this week is Moominland Midwinter. Tove Jansson describes a Scandinavian winter so vividly that as soon as we begin our chapter we are immediately transported to that cold, sleeping, snowy world. Because here, most creatures - including the moomins - are hibernating, and everything is light-starved, immobilised by ice, and rounded by snow. The story begins when Moomintroll wakes up and goes exploring; he experiences snow for the first time and meets the wakeful creatures of winter. 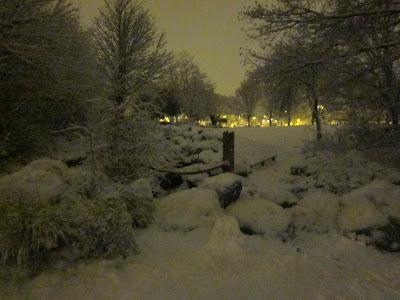 Butterfield Green in the snow

With rather Scandinavian weather conditions in the UK this week, we've certainly been having our share of snowy adventure too; from an evening of exhilarating and scream-fuelled sledging on Primrose Hill where the slopes were lit only by the beautiful park lights, to a late-night walk through a strangely hushed and deserted Butterfield Green - now an enchanted winter fairyland. 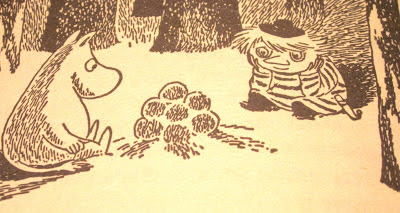 
When we read how Moomintroll spotted a most welcome beacon in the dark, a snow lantern, made by Too-ticky - a small sugar-loaf of a house, built of round snowballs, softly glowing with a lit candle inside - we decided to build our own. It was pretty easy; we just made about ten snowballs, arranged them in a circle on the ground and then added a few more on top, in a sort-of miniature igloo. Then we popped a bike light inside before placing the last snowball on top. It does look rather magical outside our house. 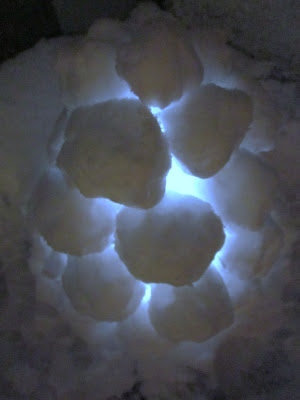 Then Daddy and Daisy made a snow-Moomintroll and a snow-Snork Maiden to go with the lantern; aren't they adorable? It's lovely to know they're both nearby while we're reading our winter moomin book. 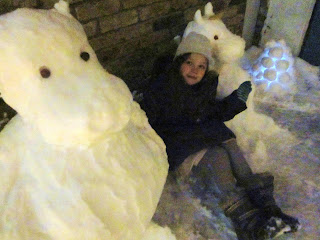 Our snow-sculptures - inspired by the moomins in midwinter

To Moomintroll, like all young children, snow is a great mystery. When he asked Too-ticky to tell him about it because he didn't understand it, she explained that she didn't either. She said,

'You think it's cold but if you build yourself a snow-house it's warm. You think it's white but sometimes it looks pink and another time it's blue. It can be softer than anything, and then again harder than stone. Nothing is certain.'

Indeed for many children in the UK, nothing is certain this week - not even being able to go to school, it seems. But while there's snow on the ground, and children there to see it, there will always be wonderful things to try, and new experiences to share. 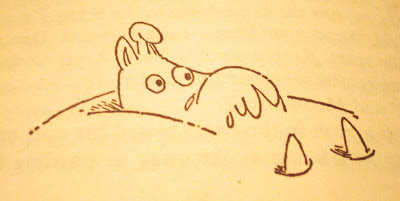