Crafty things to bring on Spring

Even though many schools have just finished for the Easter holidays, they have done so in a flurry of snow and sub-zero temperatures. This seems very strange. And very wrong. Where is Spring? We've been on a bit of a mission to find it; replacing anything vaguely wintry around the house with things we associate with the elusive season - from flowers and bunnies to chicks and, of course, eggs.

A few days ago I set up an invitation to create a Spring garland and Daisy seized the opportunity. I thought she might make some egg shapes from the jolly pastel-coloured paper as I'd found an oval stencil but, as is often her way, she just used my initial prompt to get started and it took off in her own direction. So we have, as well as eggs, bunnies, hatching chicks, and Easter baskets - all arranged symmetrically. 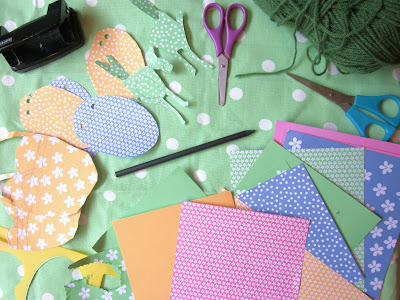 Daisy also wanted to make an Easter display. So I dug out our rather dusty decorations and she did the rest. She allowed her brother to hang some of the eggs on the tree but he wasn't much interested in helping with the rest of display. He went back to his Lego building project - much to her relief, I think. 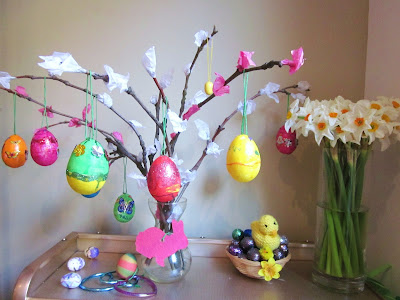 Daisy put the finishing touches to the display and I was allowed to take a photograph of it; she really did enjoy putting it together all by herself. She has since gone back to it, and made a sign for the shelf that, rather surreally, says Happy Easter! Pick eggs when ripe. And she found a spring-like picture in one of our colouring books and, as well as adding some colour with felt-tipped pens, she drew six eggs hidden in the scene. This is now proudly displayed next to the Easter tree.

If this little lot doesn't bring on Spring I'll eat my hat; my warm woolly hat, that is - I really shouldn't be needing it now anyway. 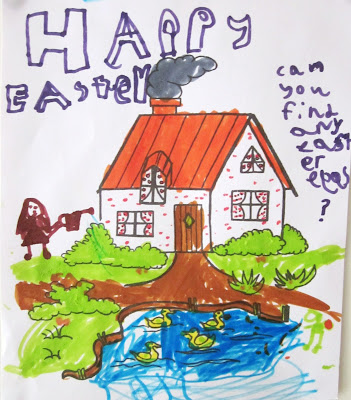