Summer's here at last! For me, June means Wimbledon (yay), cherries and strawberries (yum), and playing outside until bedtime. It also brings village and school summer fairs aplenty; an abundance of bunting, bouncy castles and barbecues.
But I haven't had much time to write about these June adventures. A casualty of my husband currently being off in far away lands maybe? Too busy being out and about maybe? Being in sole charge of my two children is full-on and tiring, and fitting work in amongst it all is a juggling game requiring precision timing. We are certainly having fun though. Here with a few highlights of our June thus far.
I spy with my little eye 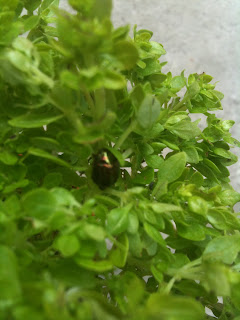 Buddy spotted the most beautiful beetle on our mini-basil plant. It was like tiny Quality Street sweet. It tolerated intense examination under the magnifying glass for two days and then was gone. Ladybird, Ladybird, fly away home.... 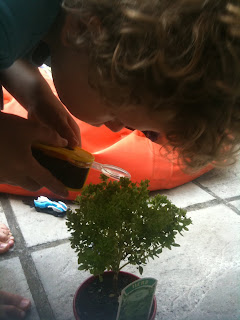 Make and bake
We made gingerbread men, well people actually. Daisy was adamant she was going to make a skirt for her gingerbread princess. 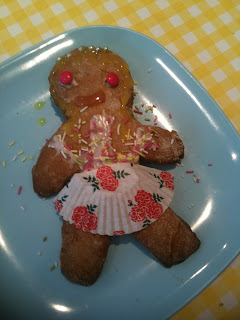 They always take great delight in announcing which limb is to be munched first. And with recent knowledge of Alice Through the Looking Glass they call out 'Off with their head!' in shrill ordering tones.
. 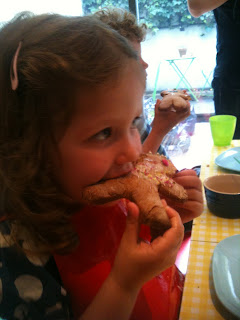 The recipe is from a lovely book called Just 4 Kids - with a really simple method and a short list of ingredients including an inspired addition of golden syrup for added chewiness. My two had never tried this before so I let them lick the spoon. It was a little too sweet for Bud's savoury palate but - guess what - Daisy loved it.
Dress-up a go-go
With the lovely weather, I've shifted a lot of their toys to our little outside space. 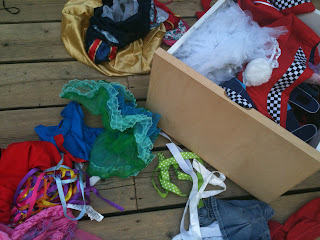 The dress-up drawer has been relocated to the decking and Daisy has embraced its appearance by stripping off immediately she returns from nursery to transform herself into various outrageous combinations of princess, cat, alien, silver swan and butterfly. I am strictly not allowed to laugh at these though; it has been tough. 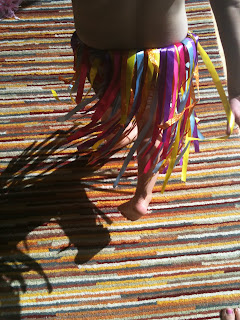 Recycling truck
Just before daddy left for his trip to the Far East, he bought a new pair of shoes. Daisy took one look at the shoebox and announced it was to be a lorry. We had great fun raiding the recycling box to make the cab, wheels and windscreen. I got one idea past the Board; a simple fan - made from thin card folded like a concertina - joining the cab to the trailer; articulation in action. Buddy was very keen to fill the shoebox with toys. The toilet roll wheels could barely hold the weight of its load. 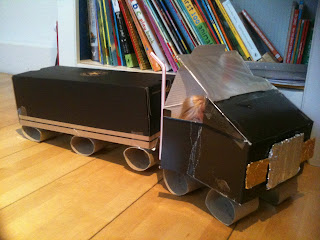 Please note the driver; Trucker Barbie. Now that's a marketing opportunity if ever I saw one.
Posted by Julia Deering at 12:27