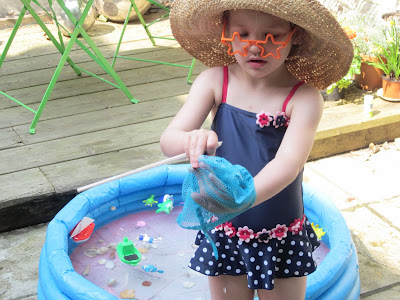 '...I do like to be beside the sea.' So goes the popular music hall ditty by John A. Glover-Kind.
But if you don't like it, or can't easily get there, here are five ways to recreate a bit of British seaside magic in your own backyard.
1) Fill a bag ready for your beach trip.
I prepared one for my Under Fives group at the Geffrye Museum and we began the session by unpacking it together to establish our theme. At home I simply handed over the huge bag of goodies to very a excited Buddy and Daisy.
In our beach bag they found: 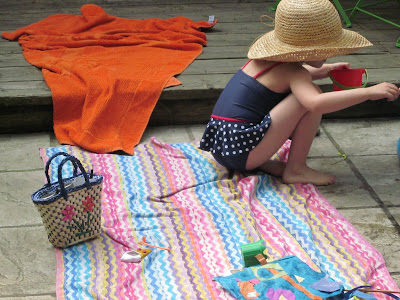 When they announced 'Let's play seasides' I knew Buddy and Daisy would be occupied for a while. Using the paddling pool, already out in the garden, they became happily involved in creating their own imaginary world; they sunbathed, 'applied' sun-cream, and filled the pool with pebbles, sea creatures and fish - scooping them up with their nets and plopping them back in the water over and over again. 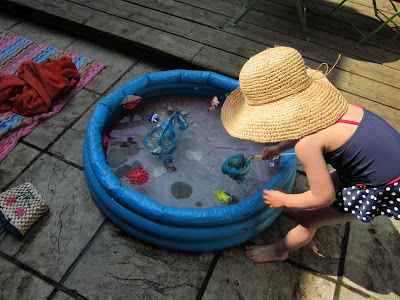 2) Make your own rock pool - a physical and musical activity.
At the museum, with about 15 children, we made our own huge imaginary rock pool. Sitting in a circle we threw in invisible pebbles, and pretended to be seaweed - waving our arms when underwater, and making crunchy, rigid shapes when exposed to the air. Then the children entered the rock pool like sea creatures; we had crabs, starfish, anenomes, jelly fish, bristle worms and there was even a shark in there - I told you it was a big rock pool. I played them Saint-Saens' Aquarium from The Carnival of the Animals and responding to the music they danced, swam, crawled and shimmied around. The water was provided by the grown-ups in attendance - they wafted a large piece of turquoise chiffon about a metre above the children. We also played a fun variation of Sleeping Bunnies (Sleeping Sea Creatures) - altering the lyrics slightly; all under the undulating blue fabric. It was all very under-the-sea; beautiful and magical.
[No photos of this, I was too busy playing...]
3) Read a story about a rock pool adventure.
We had the wonderful Julia Donaldson's Sharing A Shell - such a fun story starring a hermit crab, a bristle worm and a sea anenome. It has great glittery and shimmery rock pool pictures and plenty opportunities for counting and joining in. 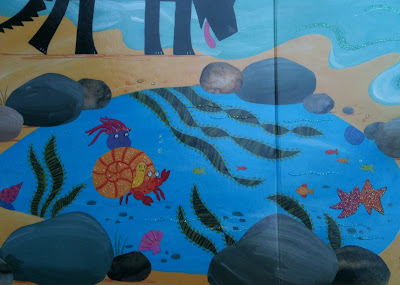 'Three friends sharing a shell
happy as house-mates can be,
rocketing all round the rock pool
in their wonderful home for three.'
4) Make your own seaside souvenir; a paper plate rock pool. 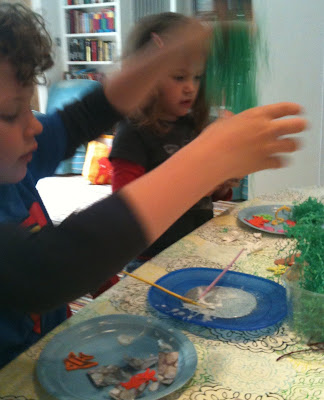 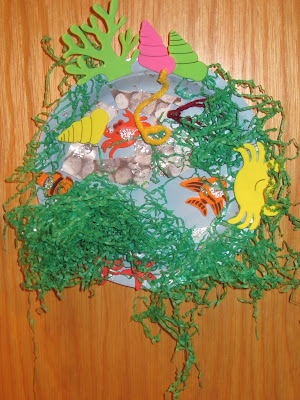 And after all that exertion...
5. Share some good old-fashioned Fish & Chips for tea.
Posted by Julia Deering at 11:14