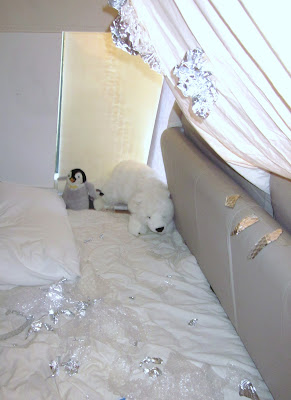 You might remember our lovely book nook made by Daisy which, back in July, I wrote about here. The space behind our sofa has been transformed into many things since then, but a few days ago it became a spectacularly sparkly and surprisingly cosy ice cave - as pictured above. Recently my children have been inspired by the BBC's Frozen Planet TV series so I wasn't surprised when they were very keen to make an icy place of their own. We checked out a few more ice caves on the internet for further inspiration, then embarked on its construction.

We all went on a search and retrieve mission for pale sheets, blankets and throws. Then, with clothes pegs and a conveniently positioned and sturdy floor lamp, we made what turned out to be a rather special space. By covering the floor with a duvet and a couple of case-free pillows we made it snowy white, and very comfortable.

The children then, pretty much independently, decorated their cave with icicles and drip-pools. They used stuff we had to hand; kitchen foil, pale tissue paper and bubble-wrap. They ripped, scrunched, cut and stuck (with sticky tack and tape) their icicles and pools to the ceiling, floor and walls of the cave.

Then they asked to make some ice columns - an authentic feature of some naturally formed ice caves. Using pale, empty gift-wrap tubes, they covered them with bubble-wrap, tissue paper and foil, and added a little silver glitter.

Once finished, the fun of using the ice cave began; they had a Polar adventure with their ‘Arctic’ cuddly toys, and several action figures took up residence in it for a while. They used it as a cosy chill-out space to read some favourite winter books, and later it became the Ice Cave Cafe when they asked if they could have their tea in there. 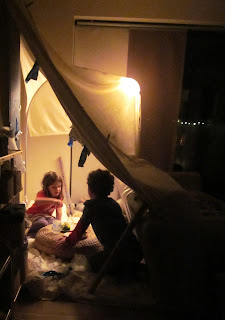 As you can see, we turned off all the lights - except the lamp in the cave - and my goodness, it was magical in there. Perhaps with the exception of the Ice Hotel in Sweden, I can't think of anywhere more unusual or more twinkly in which to dine.