Testing and building,
Inventing and more;
Two scientists working
Like never before.

They called to each other,
'Nearly there!' and 'Here's mine!'
At last each revealed
Their new rocket design.

Spacesuits folded neatly,
Stored carefully within;
It was nearing the time
For the voyage to begin.

'Goodbye planet Earth!'
The countdown then started;
All engines were fired -
Astronauts so excited!

Take-off was smooth,
To Mars they now sped;
But encountering Martians -
Headed moon-ward instead.

With technical tweaks
And much zooming round space;
Safe lunar landings
Ended their race.

Moon-walking and leaping
And 'looking for Life';
And chiselling moon rock
With a wood-chip-like knife.

Soon it was time
To head back to the rockets.
Strapped in and ready
With rocks in their pockets.

Tummies were rumbling,
Space-food would not do;
T'was time to get home
for a sandwich or two. 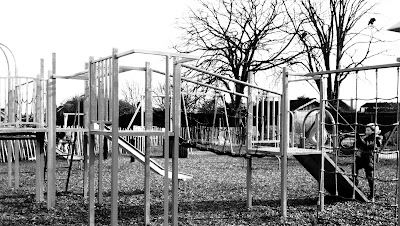 I eavesdropped on my two little astronauts as they played out this fabulous adventure of their own devising. They were totally immersed for a whole hour - the only children in the frozen playground. Dedication to science and space travel? - possibly. Fantastic imaginations and a love of playing together? - definitely.