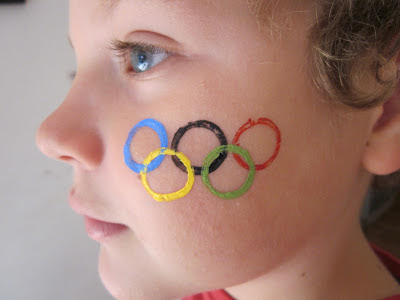 Here's how the London 2012 Olympic Games have influenced our adventures at home this week:


On Thursday we went to see BP's Olympic Journey: The Story of the Games at the Royal Opera House in Covent Garden. The exhibition explores the sporting and cultural history of the Olympic Movement with a marvellous mixture of multi-media, medals and artefacts, and although photography was prohibited, as we left we were given a glossy and well-produced souvenir brochure packed with fantastic Olympic facts and photographs. My children were particularly taken with the huge display of Olympic torches and, once home, my youngest wanted to make her own. She requested a cardboard tube, some tin foil and tape, some red, yellow and orange tissue paper and referring to the brochure's photograph of her favourite - Athens 2004 - she made a fine torch for herself. She was delighted with her efforts as you can see from the torch-bearing  garden dance below: 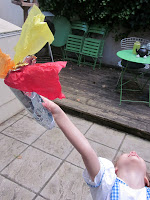 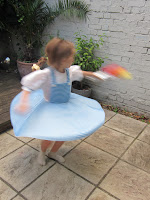 My son has been particularly interested in the TV coverage of the fencing - so much so that not only did we find ourselves at the Olympic Journey's exhibit about the multi-medal winning Edoardo Mangiarotti for about half an hour, but I've since had to become good at making paper foils at home. And I've signed Bud up for a taster fencing session here in September. He is thrilled.

We stayed up late to watch the men's 100 metre Olympic final last night, and were hugely impressed with Usain Bolt's performance. Today, my children were amused and impressed by the attention to detail of this lovely Lego animation of the race.

And last but not least, with friends round this afternoon, I eavesdropped on some brilliant Olympic-themed play. From an imaginative/fantasy adventure with themselves as penguins competing in the Games to actual sporting events like beanbag tin can alley and a pompom 'hammer-throwing' competition, I had to keep well clear so as not to ruin their flow and to avoid being hit by the improvised projectiles. My son even asked to have his face painted - a very rare request these days - and he knew exactly what he wanted. I was happy to oblige; printing coloured rings on his face was a doddle compared with the meerkat I had to produce just moments before Bolt's race last night. I think I deserve a medal for giving it a go. 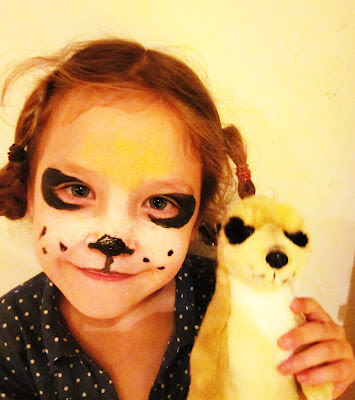