Palaces and parks: a refreshing and royal Sunday stroll 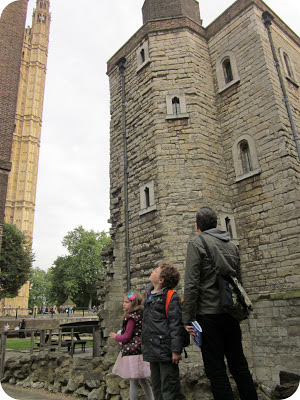 Last weekend, in an attempt to chase away some gloomy thoughts (of mine), and some cobwebs (of the children), we got out of the house, and dipped into one of our favourite books London: Adventure Walks for families by Becky Jones and Clare Lewis. With family-friendly walks packed with points of interest, and just the facts and background information to pique everyone's interest, Becky and Clare's walks are always right up our street.

This time we chose a regal-sounding walk called Kings and Queens: London's great palaces. We began at Somerset House - a little east of where the walk officially starts - but this is where our bus stopped. We always enjoy popping into the central courtyard, and are especially excited when we find the fountains turned on. It's then essential to run between the sprinkling jets of water in inappropriate footwear and non-waterproof clothing. 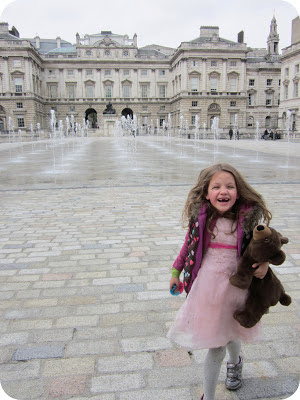 After a short stroll along the Embankment we arrived at the walk's official starting place, the Houses of Parliament, in time to hear Big Ben chime four o'clock; a great start to the walk. 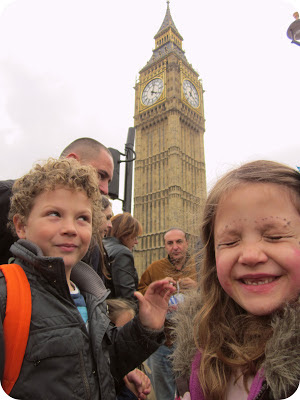 Although crowded with tourists, it was pretty exciting to be amongst the buildings of parliament, and the statues of the great and the good. Daddy read out from our book the fascinating and historical facts including the whereabouts of the exclusive politician's taxi light. It was very satisfying to photograph this whilst everyone else walked straight past it. 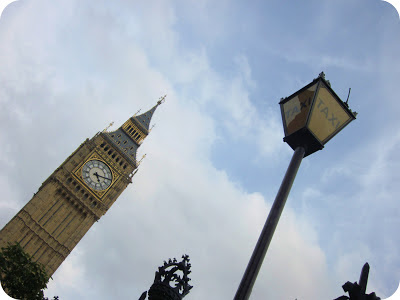 One of the highlights of the walk was visiting the tiny, but perfectly formed medieval Jewel Tower, just opposite the site of the Houses of Parliament - pictured at the top. We were just one of a handful of people there - and it felt all the more special for being a bit of a hidden gem. Our walk continued through the amazing St James's Park, full of classic autumn colour. Then as we crossed a particularly picturesque bridge we saw, tantalisingly framed in the distance, Buckingham Palace looking grandly serene and elegantly pale. 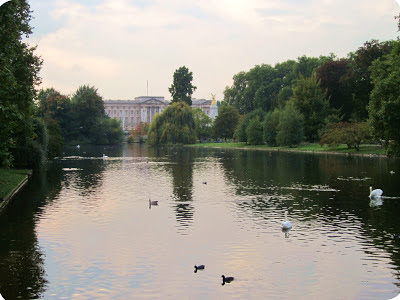 As we continued our walk, we came across something not mentioned in our book; clearly a new feature of the park. It was a giant floral crown made to celebrate this year's Diamond Jubilee. A feat of gardening expertise, it was a lovely incentive to help us press on with our progress towards the Queen's official home. 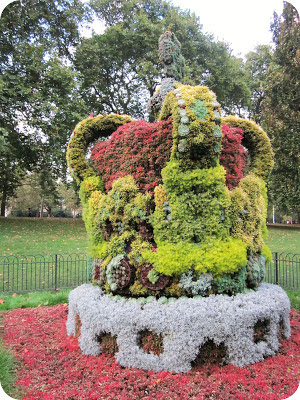 Fuelled by some rather delicious ice-cream we eventually made it to the gates of Buckingham Palace. We sang They're changing guard at Buckingham Palace as we marched up to them, although we arrived far too late in the day to witness that. We did pause at the gates for quite a while though, trying to spot the guards moving - they did, and waiting for the Queen to invite us in for tea - she didn't. 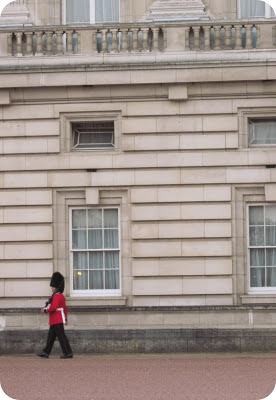 My children's energy was fading fast by the time we reached Green Park Tube station - and so we finished our regal walk here. It was a shame not to see the posh shops of Piccadilly but we didn't want to push our luck and end up with over-tired and irritable children at Fortnum and Mason. That final part of the walk would have to wait for another time. 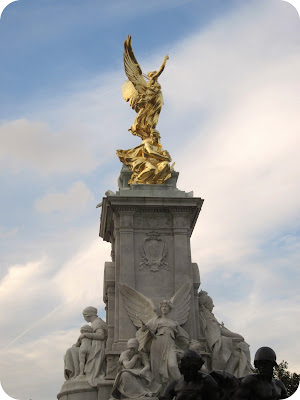 But thanks to Adventure Walks for families we had a fantastic, fun and frugal family afternoon out in central London - and as a result, we all felt refreshed, revitalised and ready for the week ahead.
Posted by Julia Deering at 08:45