Adventures at Home at the theatre: The Snow Spider 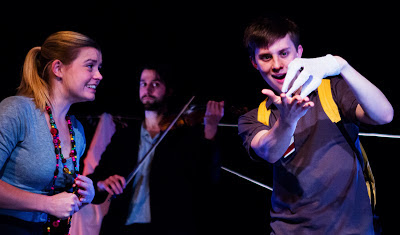 My children are experienced theatre-goers, and love a good show. Last week we were invited to a performance of a new children's play presented by Io Theatre Company and the Ovalhouse Theatre - The Snow Spider. Despite us not being familiar with the story, adapted from the children's novel by Jenny Nimmo, I felt confident my two children would like it. What I hadn't expected was its sad and complex themes  - would my children enjoy or even understand such a serious play?

Although the auditorium's heating was on full blast, causing a rather stifling atmosphere, we were most effectively transported to the cold and snowy Welsh mountains - where the story of Gwyn, a nine year old boy, and his sad, fractured family begins. The atmosphere is created by a stark, minimal set, and the talented cast who play violins, a harp, drums and other percussive instruments to evoke the wind, rain and snow of the winter weather, and the anger, sadness and occasional but diminishing flashes of joy of Gwyn's family. The use of musical motif, by James Lark the production's composer, is particularly effective in introducing a most important ingredient - magic; the glimmer of hope, the dangerously powerful driving force of the story.

Magic begins to enter the lives of Gwyn's family through his eccentric grandmother played brilliantly by Anne-Marie Piazza. Even though the actor is notably pretty and clearly youthful, she plays the elderly, naughty, child-cum-matriarch with aplomb and humour, and all without the mask of a grey wig or ageing make-up. In fact the playing of numerous characters, differing wildly in age, required of all the actors didn't phase this young cast at all. When I asked my daughter how she knew someone had become a different person in the story she told me, 'It was easy, mummy. They just put on something like a hat or a pair of shoes, and changed their attitude.'

The clever, multiple use of props and objects to create scenery was thoroughly enjoyed by my children too - the plank of wood that became a door, a seat, and a table, for example - and they liked the cheeky physicality of the acting too - Gwyn, played by Joey Hickman, climbing the craggy mountain peak made of people was particularly admired. But it was the Snow Spider herself which they thought had been most cleverly realised, and they found her appearance spell-binding.

This production of the The Snow Spider is truly spun with magic, but it addresses really complex and sad issues like death, grief, and families falling apart. This is pretty serious stuff for my two children (aged six and seven), and I wonder just how much they understood. However, the actors' lilting Welsh accents, the haunting music and confident storytelling kept them immersed in the tale, and even if my children didn't get the full meaning of the arrival and subsequent departure of the mysterious new friend, for example - there was no doubt in their minds that a good story had been told, and a magical afternoon had been had by all.