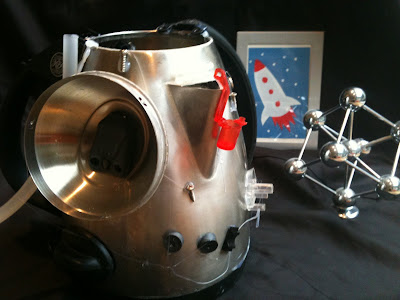 Your eyes are not deceiving you - yes, this was a kettle in a previous life, albeit a broken one destined for the Recycling Centre. Over the weekend my children saved and transformed it into this fantastic model spaceship.
While I was grumpily trying to find something at the bottom of our very messy boiler cupboard I spotted the electrical appliance and handed it over to Buddy. I suggested he might fancy taking it apart to see how it had been made. Well, I can't remember the last time his eyes lit up so brightly. Buddy is usually my more reluctant participator when it comes to making things. But here was an opportunity to break a thing and I'd clearly hit on something good. Very good. 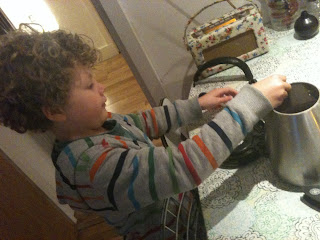 With total absorption and enthusiasm Buddy got to grips with the screwdriver, disassembling the kettle and talking animatedly about its component parts and their function. Of course I had to help with the screws, some were a little tight and inaccessible but we managed somehow. I was truly impressed by his interest and momentum; he wanted to remove every last screw, shining his torch and inspecting his work in such a professional manner.
Of course it wasn't long before Miss Daisy wanted to get in on the activity. She was particularly keen to help Buddy make the kettle into something new. 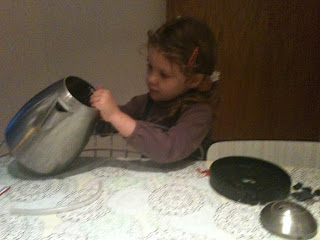 So with the help of a newly acquired glue-gun we spent a very happy half hour putting back every last screw and washer, handle and tube in an altogether different way. 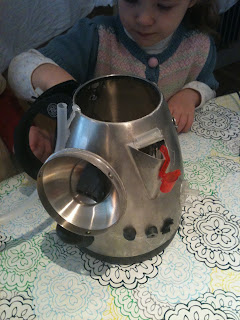 Buddy: It's a model spaceship from Star Wars, it's a goody one. It's got a baddy pod here; that red thing. They get shooted off when they've learned their lesson. Into their base. But they're just kidding.
Daisy: That's the way out, that's the way in. And those screw-things are landers.
It is with thanks to the lovely Irresistible Ideas For Play Based Learning people that I owe this post - this whole activity actually. They recently wrote about letting their preschoolers loose on some old clocks. They re-made them into the most amazing time-machine sculptures. Without their reassurance that you can use glue-guns with small children I don't think I would have been brave enough to embark on this venture at all. I'm so glad we did, and we'll definitely do it again - we're already on the look-out for other broken appliances.
Posted by Julia Deering at 01:50