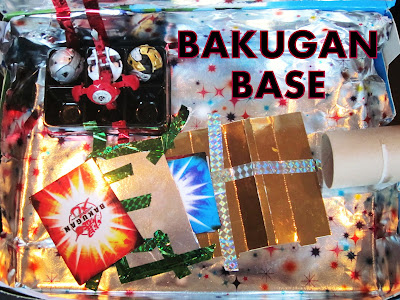 Meet Rex, Metal and Sky Raider - our first three Bakugan bought by my seven-year-old son with some of his birthday money. Apart from my friend mentioning she'd recently found an unwelcome and rather pointy Bakugan in her bed, I'd never heard of them before. But Buddy was adamant that this was what he wanted to buy.

Keen to be supportive, I attempted to help my children play Bakugan by reading out the game's rules which came with the set. We found them totally incomprehensible, and I felt rather grumpy about it; Bakugan seemed to be a bit rubbish - and quite possibly an utter plastic-tastic rip-off. I stepped away mumbling something like I think you roll them onto their cards and they pop open - and then my dears, your guess is as good as mine  - and left them to it.

Thankfully, five minutes later, my eavesdropping mummy-ears tuned into the most wonderful game being played - where each Bakugan had been named and where the Bakugan world (in the living room) revolved around their powers; rolling and popping open, swimming, battling and flying around - turning baddies into goodies. There were also parties, bedtimes and a wedding to attend - courtesy of Miss Daisy's input, I should think. What a fabulous way to play with them. Suddenly I didn't feel quite so grumpy.

The Bakugan base, pictured above, came about a little later when we were trying to think of something to make out of our newly empty cereal boxes. Daisy came up with the idea of a Summer box (pictured below) inspired by a new sun hat I'd bought her at the same time as the Bakugan purchase. As you can see it's full of summery things which she gleefully collected from around the house. It even has a mirrored lid so you can see if you've put the summer things on right. 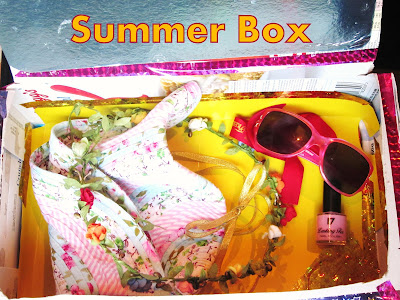 And Bud came up with the idea of the Bakugan base. We raided the recycling box for their bed, a transforming pad and an entrance tube and we made everything shiny - just as the Bakugan like it, apparently. So now they have somewhere to be stored and maybe, just maybe, I'll escape finding any of the pointy little fellows in my bed.