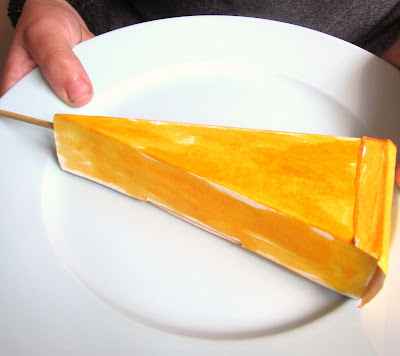 When I asked my seven-year-old, 'What could we make this cardboard cheese packaging into?' I was not surprised, when he cheekily replied, 'I don't know. Cheese, maybe?' I took his offhand comment as an indication that my hint-y craft-prompt was not going to fly on this occasion. I was on my way to put the packaging into the recycling box when Bud stopped me - and said, ' No, mummy. I really want to make that thing into some cheese.'

With that, he took the box (which I'd flipped inside out) and announced that it needed to be coloured yellow. He used a painting pen for this and soon it really did resemble a block of cheese. He even added a flap of paper to the edge that didn't have a side - which he measured, coloured, cut and stuck on with a glue stick.

It was this flap I think, which gave him the idea that the cheese could have something hidden inside it; something that could pop out. Now, who or what could be hiding in a cheese? Why a mouse of course! I knew all those Tom and Jerry cartoons weren't a waste of time.

We found our cute finger puppet mouse - he fit perfectly - and Bud worked out that we'd need something to make him pop out. So, we attached the mouse to a thin wooden stick (with a little sticky tape) and hid him inside the cheese. Ta - dah! 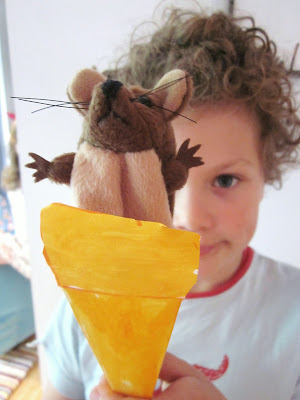 I really loved Bud's interest in making something using paper, paint and glue - he usually reserves that confidence and enthusiasm for Lego creations. Here are Buddy and Daisy to demonstrate how it works.

This trick has sparked-off other ideas for pop-ups we could make - we do have a lot of finger puppets. So far, they've come up with their mermaid puppet swimming out from a big shell, mini-monkey jumping out from a banana, and little Tinkerbell flying out from a flower. I don't know if we'll ever get round to making these other pop-up puppets - but it's been such fun chatting about it. And in the meantime, we're still loving Buddy's cheese-on-a-stick trick.