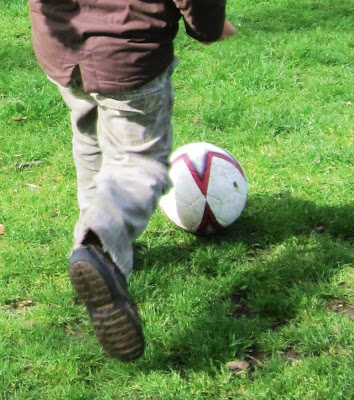 A visit from Nan and Grandad this weekend coincided with the FA Cup Final. As huge football fans we knew they'd want to see the match so of course we said we'd watch the televised game with them, and we came up with some fun and creative activities that got everyone excited about football - at least for the afternoon. Here are five fun things to try: 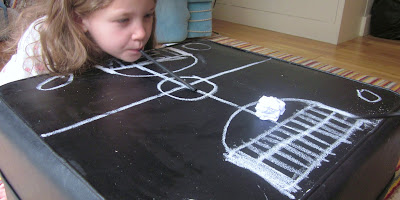 Bud and Daisy drew a chalk pitch on our PVC pouffe, and then, kneeling opposite each other, they each used a drinking straw to blow a ball - actually a screwed-up piece of paper - around the pitch. To score a goal the ball had to be blown off the pouffe at the goal markings on their opponent's side. An exciting match ensued - it got extremely noisy and dribble-y, and made them laugh so much they got the hiccups.

Using a simple butter-cookie dough recipe we soon had a whole team of footballer biscuits ready to munch during the match. Bud drew chalk markings on some green paper, and I covered the whole thing in sticky-backed plastic before the biscuit-players and balls were strategically placed all over the pitch. It really didn't take long for them all to get sent-off* though.

3. Play football-oon
During the match - and out of the way of the TV screen (mostly) - my five-year-old's attention was happily occupied with balloon keepy-uppy. We spotted some very fancy footwork, great headers and brilliant slow-motion action replays.

4. Prepare refreshing oranges for half-time
Rolling oranges around and around with the palm of her hand (to release the juice) entertained Daisy for quite a while during the match. Then she helped me cut the oranges into quarters for everyone to suck during half-time - just like real footballers. Do they still do that? 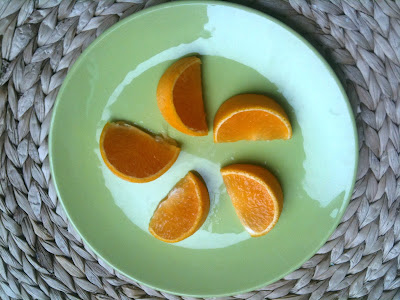 5. Have a pre-match kick-about
Fortunately the sun came out for long enough that we all got out for a quick kick-about before kick-off. Nan and Grandad showed our children some pretty impressive ball skills. Never mind the final score of the FA Cup -  for me, the best result of the day was seeing them all enjoying playing football together in the sunshine.