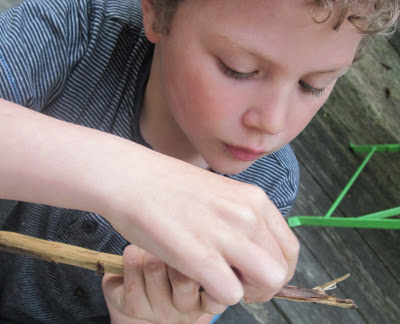 My children are definitely going through the stick collecting phase. Whenever we go for a walk - be it through a park or wood, or even along a street - they are always on the look-out for them. Usually the sticks are collected simply because they are 'good ones' - and who am I to question that? - but last week, during a wonderful walk through Highgate Woods, the sticks being sought were to be wands. Below you can see Buddy and Daisy testing out the magical potential of a couple of them. 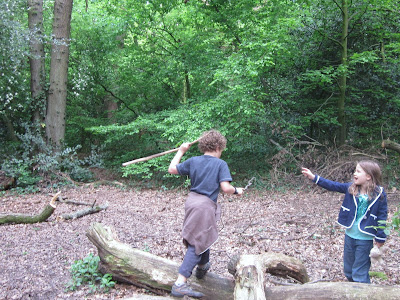 Back at home, with several sticks in hand, Buddy explained how he wanted to make a wand as instructed in his book Wizardology. In the extract below you can see that this would have involved stripping the stick of its twigs and leaves using a special kind of knife and then carving patterns into it.  Although I like the idea in principle, I really didn't think Buddy had the skills to carry this out safely.

[from Wizardology: the book of the secrets of Merlin - published by Templar 2005]

Fortunately Buddy agreed that we needed to think of another way to decorate his wand. When we found he could strip the stick of its bark quite easily and that felt tip pens marked the wood beautifully it gave me the idea of making a trompe-l'oeil - or 'trick-of-the-eye' carving. Buddy liked this idea, and thought he'd definitely be able to do it.


So he began peeling away his stick's bark; he found this to be a very satisfying and absorbing occupation as you can see in the photograph at the top. Then he drew round his wand on some paper and planned out some 'carving' designs as you can see below.

He used the felt-tips to mark the wood to create a very detailed carving-effect, with all sorts of special markings - to help with its magic, apparently. I gave it a quick spray of varnish and allowed it to dry thoroughly before handing it over to my wannabe Harry Potter so he could practise his spells. It certainly looks magical to me. 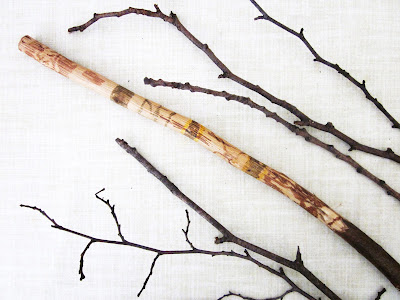 And as for my little Hermione-in-the-making - well, she wanted to paint her wand. So I got out our metallic acrylics and both she and I spent a very lovely half hour painting lots and lots of sticks - I mean wands - for all the members of our family. And I just love how these turned out too. 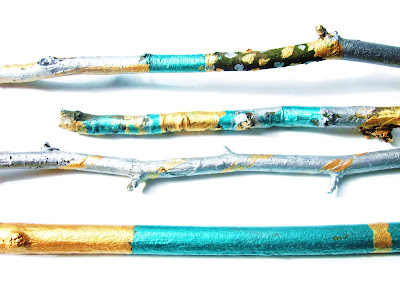