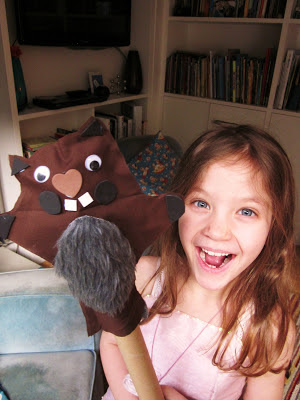 We love Groundhog Day here at Deering HQ. Although we live in London, every February 2, we still want to know whether or not Punxsutawney Phil has predicted an early spring in Pennsylvania. And since my children were very small, they've always re-enacted the ceremony at Gobbler's Knob - usually using a brown sock, or some such, as the groundhog. This year, my daughter asked if we could make a proper puppet groundhog to use in our re-enactment; a sock would not suffice, apparently.

So I set up our kitchen table with the following:


Here's how we made our groundhog puppet:

1. Daisy chose which fabric was to be the basic shape of her groundhog and lay it out flat in front of her. Then she put her hand down on top of it with her little finger and thumb stretched out to show where the paws of the groundhog might go.

2. I drew a chalk outline at least two centimetres away from her hand, in a sort-of groundhog shape - making a head with little ears, and two paws where her little finger and thumbs were. If you try this, make sure you leave a lot of room at the wrist end of things - make it wide enough for your little one's hand to fit in (ours was a little narrow, to be honest).

3. I cut out this shape and then Daisy drew round it on another piece of the same fabric to form the back of the groundhog.

4. While I was cutting this out, Daisy decorated the front of her groundhog sticking on the foam shapes and googly eyes with dots of fabric glue. She also wanted it to have a furry tummy and tail, so she drew an oval - for the tummy, and a long narrow triangle - for the tail - in chalk, on the back of some different fabric, which I then cut out for her.

5. While this was drying a little, I put a line of fabric glue around the edge of the back of the puppet, making sure the orientation was correct; the puppet was far from symmetrical.

6. We stuck the front of the groundhog to its back by matching the edges together as best we could, then we put a cardboard tube inside it to prevent the front and the back getting stuck together. It was dry after about 30 minutes.

In the evening Daisy re-enacted the Groundhog Day ceremony, very seriously, to a houseful of aunties, uncles and cousins. After watching her performance Daisy's little cousin aged three, promptly picked up Phil, and had a turn herself. She put the puppet on her hand, made him look around for his shadow, and then 'read' from Daisy's piece of paper that we would indeed have an early... morning!


It seems we have a new Punxsutawney Phil fan in the making.