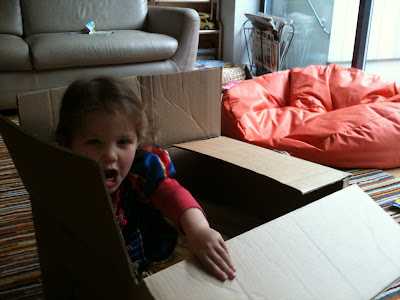 It was with such excitement that we opened this box today. Daisy, just awake from her nap, was especially keen to investigate its mysterious content. First, a lot of straw, but then such treasure was to be found; from lettuce, chard and spinach, to strawberries, courgettes and tomatoes. Not the fruits or vegetables ready to eat, but the baby plants ready to plant and grow. Gulp.
Now, I had been expecting this box of delights (it was a lovely present from my sister from Rocket Gardens) but what I wasn't prepared for was the sheer quantity of plants it contained; we are simply not equipped for its bounty. We managed to coax each little light-deprived plant from its covering and, still on their base of cardboard and straw, we watered them well. This turned out to be enough gardening for my two today and their attention drifted away from the blinking and stretching baby greens to the huge box in which they had arrived.
While I pondered the problem of how to accommodate an allotment's worth of plants in our tiny garden, Buddy and Daisy had a fine old time playing with the now empty box. They played hide-and-seek, brilliantly faking-up the mystery of where the other was hiding - oh, they're in the box, are they? Again? Then they used the box as Buddy's work, Daisy's house, their wedding venue and a car. Eventually a take-it-in-turns-to-jump-out-of-the-box game evolved (which needed a bit of mummy-refereeing to ensure fairness). This game made them laugh so much Daisy got the hiccups.
To extend this activity, I taught them the Jack-in-the-box rhyme:
One person curls up small in the box...
Jack-in-the-box
Still as can be
Lift up the lid
What do you see?
It's a .... Jack-in-the-box!
Jack pops out of the box, arms waving saying 'Boo!'
Then other things hid in the box; a car-in-the box, a piggy-in-the-box, a kitten-in-the-box to name but few. We practised the sound and action of the thing-in-the-box before each turn. Great fun.
And while all that was going on, I think I worked out what to do with the plants. There's a brand new raised flowerbed, currently plant-free, in a very sunny patch of Buddy and Daisy's school playground. Our newly acquired plants would thrive there. And Buddy and Daisy would still get to see them grow. I'll investigate further tomorrow.
Now that's thinking outside the box.
Posted by Julia Deering at 12:00