Dinosaurs for the doubtful 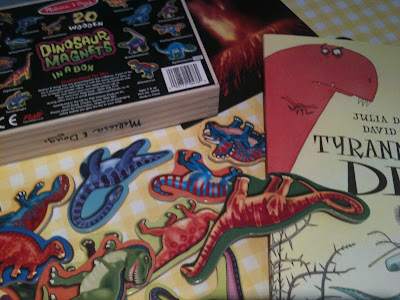 My two children have never caught the dinosaur bug. I know this is quite unusual - they just refuse to get excited about them. Maybe I haven't been that encouraging; other than the unimaginative attack-and-fight-the-other-dinosaur-type game, I struggle to find many superior play scenarios to offer them due to the nature of... well, dinosaurs. Buddy and Daisy do tell me they know some things about dinosaurs though, and that they understand the prehistoric world was a very different place to now - with erupting volcanoes and a changing climate, that kind of thing. Oh.
However, today evolved into a bit of a dinosaur day. It started with Daisy unearthing our set of magnetic dinosaurs. She asked me to guess which was her favourite by her description of it, and then I got to have a turn. This became a very satisfying game that got us all looking closely at the similarities and differences between the twenty or so dinosaurs in the set. When it was time to make food, we sorted the dinosaurs into those that were vegetarian and those that were meat eaters. We offered the grizzly group tidbits as we assembled our pizzas; the ham, sweetcorn, olives and cheese getting snaffled by my two little omnivores. While the pizzas were in the oven we enjoyed the brilliant Julia Donaldson story, Tyrannosaurus Drip.
At dusk, in the garden, we became palaeontologists. Using a dinosaur skeleton excavation kit (found languishing at the bottom of our games cupboard - a forgotten birthday present) we got a taste of the excitement in discovering and digging up dinosaur bones. What a find!
Bedtime reading was Jane Yolen and Mark Teague's charming How do Dinosaurs Say Goodnight which draws an amusing parallel between children at bedtime and dinosaurs. Cheeky.
So although I wouldn't have believed we had anything much to do with dinosaurs in our house, I was surprised and pleased to have managed to muster plenty resources for a day of dinosaur adventures. It's amazing what you can dig up when you try.
Posted by Julia Deering at 10:31