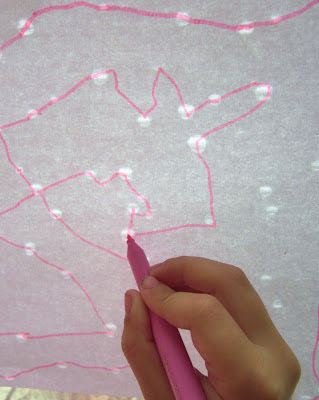 Apparently the month of June was the wettest on record. Nearly a week into July, and we're still dodging - or ignoring - the showers, trying to play outside as much as we can.

Yesterday, as the rain began yet again, we took our things in from the garden. My daughter nipped back outside to retrieve a piece of paper we'd forgotten, and as she brought it in she noticed how the raindrops had made a very nice kind of pattern of dots all over its surface. We found we could see these dots especially well if we held the paper up to the light.

I secured the paper to our window to look at it some more, and Daisy decided to join up all the raindrops - with a pink felt tip pen. It was like a huge dot-to-dot picture - but without the numbers or the rules. She joined them up just as she liked, wondering what pattern the raindrops would make. 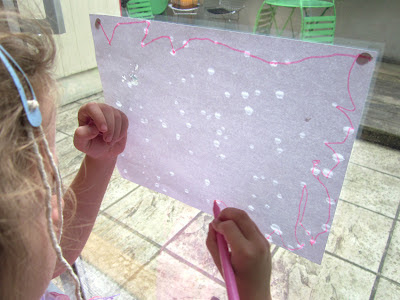 This was such a lovely little creative activity; I love it when my children remind me just how spontaneous and exploratory making art can be.
Posted by Julia Deering at 13:19