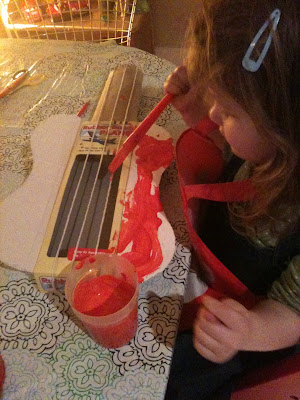 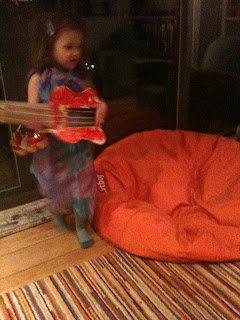 Daisy took one look at the empty box and announced, "This is going to be a guitar!" Fortunately we were able to provide the extra cardboard - from the recycling box, the sticky tape, the string for the three strings (very important, had to be three) and the orange paint (very important, had to be orange) so that Daisy could realise her vision.
She knows her guitars, does Daisy - daddy plays the acoustic and electric variety - so she was very clear about its design. I was there merely to cut out and help out with the assembly of her instrument. Once satisfied, she allowed it to dry. Daisy disappeared upstairs, reappearing sometime later dressed as a mermaid, in a large tie-dye silk scarf, "Ready," she explained, "for my gig."
We were then thoroughly entertained by our mysterious singing, dancing, guitar-wielding creature from the sea. And the guitar was most proudly taken to nursery for Show & Tell today.
It's a shame I didn't mix more PVA glue into that orange paint though. It's peeling off quite dramatically now. How very rock & roll...
Posted by Julia Deering at 13:39