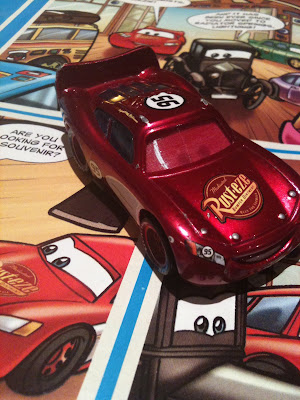 Yesterday, we watched Disney/Pixar's Cars at the new Kids' Club at Screen on the Green. Now, I am still equivocal about being immersed in darkness for two hours on a Saturday morning - it certainly felt strange surfacing at the end, blinking like a mole, into a busy Islington lunch time. But it was a drizzly, unpromising morning and my children love this film. We just had to go. Our toy Lightning McQueen accompanied us and upon arriving home was the focus of the children's play for quite a while.
Linking a cinema trip with an adventure at home has previously resulted in poster-making. For example, after we saw the film Up my children each made a lovely collage poster featuring a cut-out house beneath lots and lots of balloon-shaped stickers. I remember how much they enjoyed joining each balloon to the chimney with a 'string' of felt-tip pen. But yesterday we simply shared a story from an old copy of the Cars magazine.
I've never found the cartoon-strip the easiest of formats to read aloud (one has to go to town on the accents, I suppose). I usually find myself embellishing the story outside of the dialogue. I wondered if Buddy was getting the concept of speech bubbles at all. Could he work out who was talking from my dodgy accents? But it turned out he knew exactly who was talking; he knew about speech bubbles.
He told me, 'I even know about the ones that have blob,blob,blob and then a bumpy circle. Those are the finkin' ones, mummy.' The story didn't have any examples of characters doing any thinking, more's the pity, but I 'fink' I know what he means....
Posted by Julia Deering at 08:57