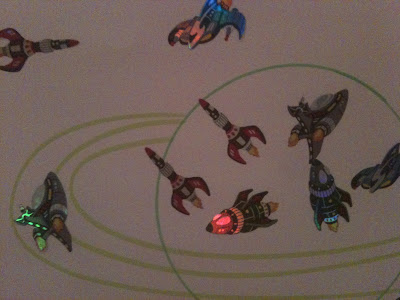 When I look at this picture, it makes me smile. It didn't start from a particularly inspired idea; I'd just bought Buddy a packet of stickers on a recent shopping trip and he wanted to use them straight away. So, to his specification I very hastily drew the planet background on a sheet of A4 paper (otherwise his attention would have undoubtedly wandered). As he arranged the rockets, he became increasingly animated. He told us how fast they were going... that they were nearly crashing... racing... zooming... through the galaxy and so on. Lovely stuff for 50p's worth of stickers!
Later, I noticed Buddy gazing at the eye-catching, light-reflecting picture now proudly displayed on the wall, and he said wistfully, 'I love that picture SO much. I want to keep it there forever.'
But the reason the picture makes me smile so much is that it keeps reminding me of the hilarious, if slightly alarming comment his younger sister made earlier today when I was gently suggesting Buddy might want to adjust his pencil grip.
She looked over, sighed in an exasperated fashion and said, 'Oh Buddy, it's not rocket science.'
Posted by Julia Deering at 14:06