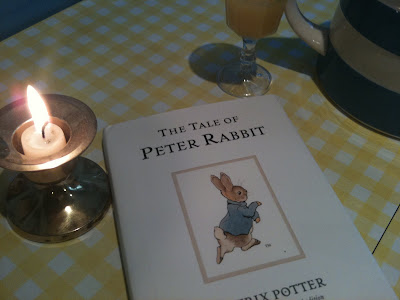 During breakfast this morning, Daisy decided she would like a story by candlelight (there was one left on the table from a rare grown-up dinner time the night before). We shared a lovely breakfast reading Beatrix Potter’s Tale of Peter Rabbit; its illustrations being gently illuminated by daytime candlelight (one of my favourite things). When we got to the page where Mrs Rabbit warns Peter about the dangers of Mr McGregor’s garden, ‘Your father had an accident there. He was put into a pie by Mrs McGregor,’ Daisy asked what was meant by having an accident and being put in a pie.

I explained that some people eat rabbit, and that is what had happened to Peter’s father. Buddy, her brother, said he would never eat rabbit. ‘I would hate to.’ And Daisy, not to be out done gave her view on the matter. ‘If I ate rabbit, it would make me do a big burp.’

When I asked why, she replied, ‘It would make me a do a big burp because of its big ears.’ And this from a three year old who announced she was a ‘vegetawian’ not two days ago. Love it.

This has given me the idea of using The Tale of Peter Rabbit as the story in my next Nursery Rhyme Time at the . I’ll be leading an hour of songs, games and craft for children under five and their carers. It links with the Museum’s latest exhibition A Garden Within Doors - plants and flowers in the home.

One of my sessions is called Lavender’s Blue and now I have my story idea, I think. The Tale of Peter Rabbit was first published in 1902. So it’s right time-wise, with a lovely garden setting too. Maybe we won’t use candlelight in the museum though, there are Health and Safety issues of course. But they do have a lovely LED candle that fits into an authentic Victorian candlestick. Hmmm. That should set the atmosphere nicely.